NOTE: This page has incorrect/outdated/wrong material on it. Use at your own risk.

These notes use a web-based software defined radio to explore some concepts around radio - specifically, radio frequency interference (RFI).

As you can guess by the name, RFI consists of emitted radio waves that interfere with signals on different frequencies. The radio frequency spectrum is just a small part of the entire electromagnetic spectrum: 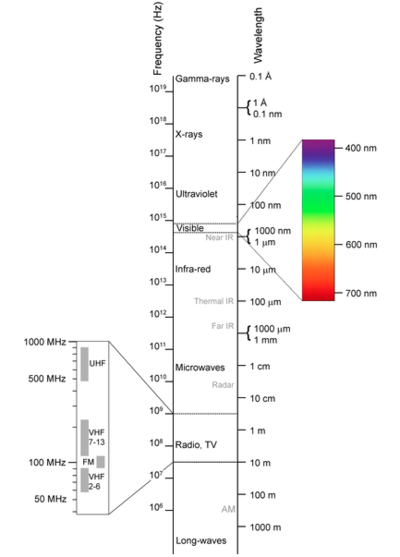 (Also check out the XKCD version of the electromagnetic spectrum)

This means there's a limited amount of space in the radio spectrum, with a lot of different applications that can use it. Which technologies use which frequencies depends on many factors. Among other things, it can be a function of the range required by the wireless transmissions - signals at higher frequencies dissipate their energy faster, and carry for a shorter distance. You wouldn't want to use a frequency for wireless internet that propagates for miles! Likewise long-range aircraft communication would need much different signal properties than a hands-free Bluetooth headset.

It's important - particularly in that last example - that different applications and devices don't interfere with each other. It could be disastrous if a company started selling microwaves and refrigerators that created interference on a frequency critical for infrastructure, like an aircraft communications channel. So the concept of radio frequency interference is a very important one.

While RFI can sometimes refer to an inadvertent transmission on the wrong frequency, it more typically refers to a type of interference that's just "random noise" - and this is tied closely to how circuits are designed, and how they draw their power.

When I was in second grade, I became a licensed Tech-Plus ham radio operator (KC7DBU). I was pounding CW on 40 meters as a seven year old. And I noticed something funny would happen every time I sent CW: when I pressed down the transmit key, which would send a voltage out to the antenna, and turn the voltage into a radio frequency wave, and broadcast that wave in every direction, that radio wave would interfere with the television. As I would send morse code (dash-dot-dash dash-dot-dash-dot...) I would see the TV flicker with the same morse code message. When I held down the transmit key, the colors on the TV would become pale and there would be a static fuzz.

How could this be? The radio was transmitting on the amateur radio frequencies - in particular, 7 MHz - while television broadcasts were on frequencies that were further away, 50-900 MHz. So the radio transmissions weren't happening on those frequencies.

Let's talk about that CW transmission circuit for a moment. When I was holding down the CW transmit key, it was creating a contact between two pieces of metal, which closed a circuit, which sent a tiny voltage back to the radio. The radio, in turn, relayed a much larger voltage out to the antenna, which turned the voltage into a radio transmission.

And then what? What happens next is key to understanding RFI. Next, any remaining voltage will be connected to ground - in the case of this CW rig, the ground was a big metal rod dug deep into the ground, and connected to the antenna. The more excess voltage left when the antenna is finished, the more voltage is discharged through this ground. This discharge process creates radio frequency interference.

Generated RFI is random - it can occur on different frequencies, and can sound different. Virtually everything that has a powered circuit with voltage will generate RFI (this is how spies who sweep a conference room for bugs find the bugs). Automobiles generate RFI from the on-board circuits; power lines generate RFI; refrigerators generate RFI; radio towers generate RFI. But rest easy - it's not total chaos, because all of this RFI is regulated by the FCC.

RFI can be a fuzzy and abstract concept. To make it a little more real, it would be nice if we could sit down in front of a ham rig and use some of its radios and antennas to explore it.

Fortunately, we can do precisely that! WebSDR.org has a nice list of stations with different bands all around the world, and they all use the same web interface, so we can use these sites to see what's going on on the amateur radio bands. This will be useful for seeing what RFI looks like.

First, open one of those remote WebSDR sites. I like the Hack Green SDR in England: http://hackgreensdr.org:8901/

You'll see a waterfall display of frequency activity. Here's what a busy frequency band looks like: 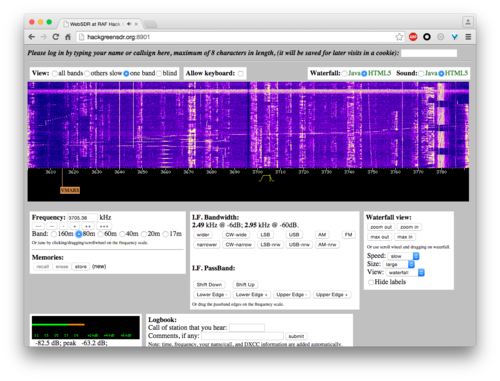 and here's what a dead frequency band looks like: 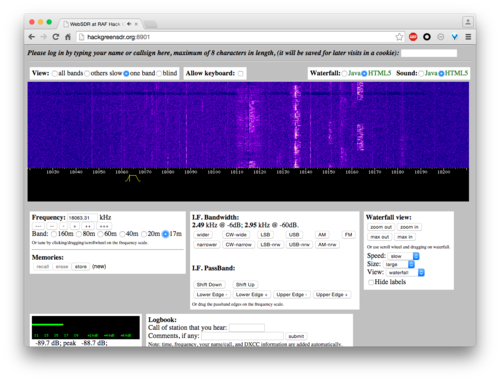 Conditions on different bands can change drastically day-to-day, year-to-year, and even decade-to-decade. (For more on this, get your ham license!)

First, let's take a look at some normal, non-interfering transmissions sound like.

Since this station's software defined radio is on amateur radio bands, there are two types of signals we'll typically be listening for: voice (or sideband), and morse code.

Voice traffic is easy to spot, because it's always 3 kHz wide. This shows a whole bunch of voice signals on one side of the 40 meter band: 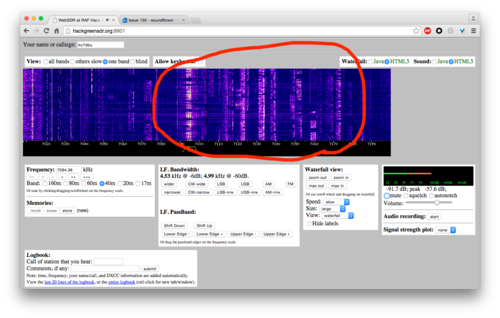 A note on SSB, USB, and LSB: to transmit a voice signal, you use up 3 kHz, but you have to pick a single frequency to transmit on, as your primary transmission frequency. The additional 3 kHz of bandwidth used can either be above or below the nominal frequency you're transmitting on. If it's above, you're using USB. If it's below, you're using LSB.

Here's a tour of some voice signals on 40 m from the Hack Green WebSDR station, to give you an idea of what they sound and look like:

CW traffic, also easy to spot, is very narrow, and shows up on the waterfall display as a thin vertical line - as the signal gets stronger, the line gets thicker, and the signal starts to visually resemble morse code written out with dashes and dots. This is a portion of the band with a large number of CW signals: 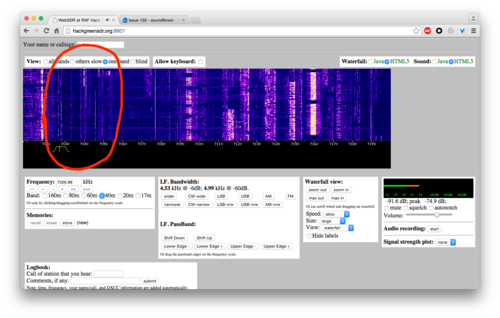 These CW signals are so narrow because CW just ain't that complicated. When you're speaking into a microphone, your voice has a wide range, but when you're sending a single tone, you don't need to use a lot of the frequency. This means that CW can be allocated smaller portions of the frequency, but still have enough throughput for many people to make contacts.

Here's a video I made of some CW signals from that station. These should give you an idea of what a typical morse code signal sounds like.

Now let's look at some interference on these bands - signals that are not voice or CW transmissions, but random radio noise.

These signals can be wide or narrow; they can stay on one frequency, or hop frequencies; they can be continuous, or intermittent. Here's a waterfall display that shows a band with lots of interfering signals: 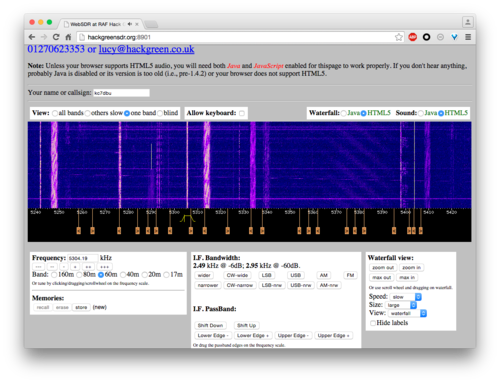 I also put together a recording of the band when I took this picture. Here's the video that shows what these different interference signals sound like:

There are a couple of different kinds of interfering signals shown in this picture. First, we have a couple of very wide signals that are just noise when we tune into them on the SDR: 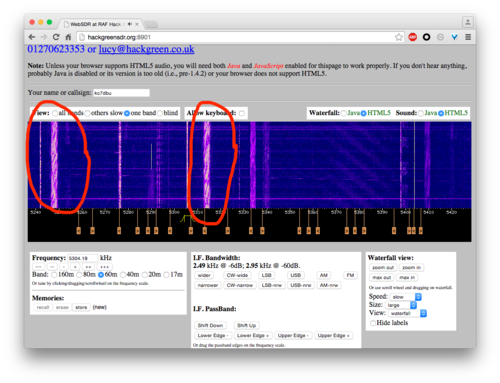 There are also a couple of narrower signals that are noisy: 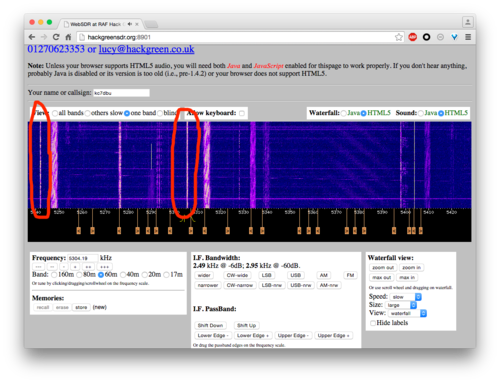 and this rather curious-sounding signal, which sounds like a combination of fax and morse code. This is probably a special protocol that this WebSDR radio isn't designed to receive and interpret: 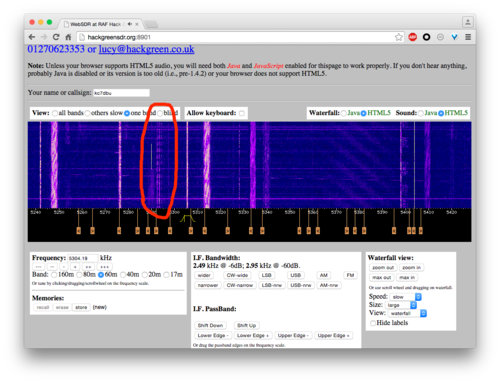 Finally, there are horizontal interference signals. The first one is actually sweeping upward through the entire band: see how it drifts downward (moving in time) as it sweeps through the frequencies? 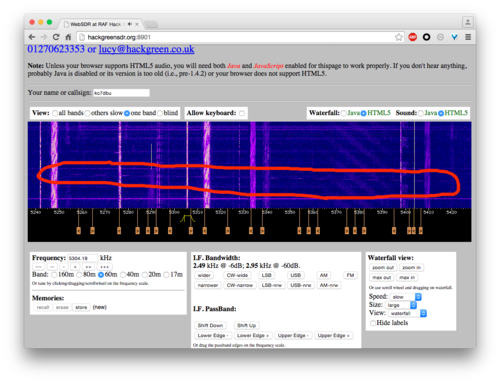 And the second horizontal interference signals are thick bands that show up occasionally: 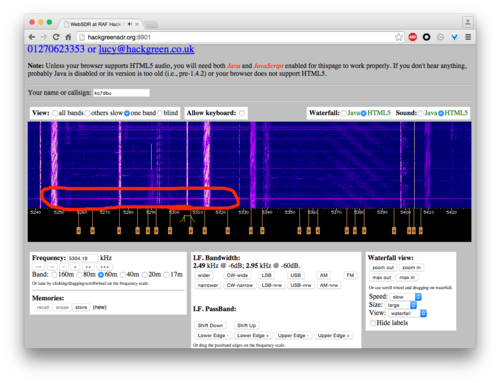 RFI All Around Us

You can find RFI anywhere and everywhere. Even when there are no electronic circuits around, there are many natural forces creating electromagnetic waves. Our man-made environment just serves to increases the abundance of noise on different frequencies.

Here's an excellent deep dive into RFI around the home: http://randombio.com/interference.html

While these WebSDR stations are fun to listen to, it would also be nice to listen in on more frequencies, and do so locally.

Enter the HackRF One. With a HackRF One and a good antenna, you can replicate this process with a much wider range of signals. I'm currently assembling some notes on exploring the radio frequency spectrum with the HackRF, so stand by for more...