This page covers a basic blinking hello world circuit on the Raspberry Pi.

First, what's different? The Raspberry Pi has a full-stack Linux operating system running onboard, and its microcontroller is much more flexible. The Arduino, on the other hand, can only run compiled C code sketches, and of limited size. The Raspberry Pi is thus much more powerful.

What's similar? The Raspberry Pi can also be used for building circuits, using the Pi's GPIO bus. This is the large set of parallel pins that you see onboard the Pi. You can connect those GPIO pins to a breadboard to build a circuit, and you can then use Python scripts to control the GPIO pins.

You'll need a Raspberry Pi with the Raspbian image. The Pi should be connected to your laptop via a network cable. It should have Python installed on it. See RaspberryPi/Installing and RaspberryPi.

You'll want to plug a network cable into the Raspberry Pi and into the laptop. 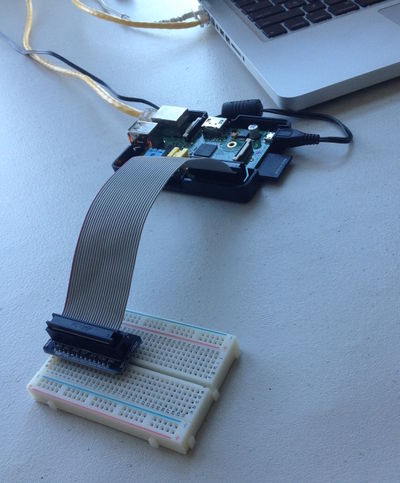 and a close-up of the GPIO cable: 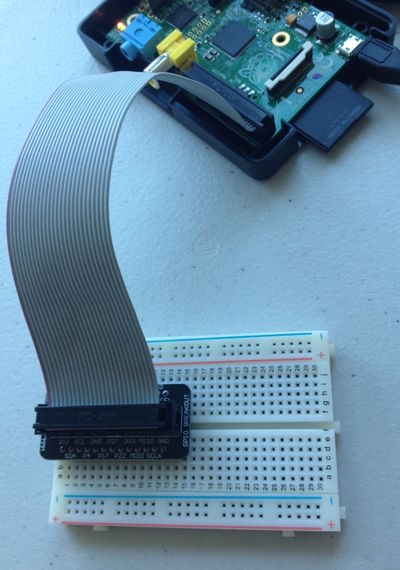 Now connect your Raspberry Pi to power. Give the Pi a minute to finish it's boot sequence. Now you should be able to ssh to your Pi: 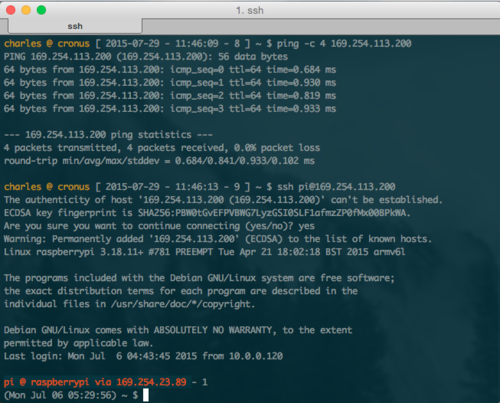 I've modified my prompt, so yours will probably look different.

For the pin numbers you'll use in your GPIO code, the pins are numbered in pairs: the first pair at the top are 1 and 2; the next pair down are 3 and 4; and so on.

That means that the pin labeled "P22" on the GPIO breakout board is not actually referred to as Pin 22 in your GPIO script. It's actually Pin 15.

We're finally ready to control the Raspberry Pi GPIO pins from a Python script. We know what pin we want to control. Now we install and invoke the Python GPIO library.

If You Have rpi.gpio

The RPi GPIO library should come standard on Raspbian images, but you can check to make sure you've got it anyway. In aptitude, this package is called python-rpi.gpio:

If You Don't Have rpi.gpio

If you don't have the python-rpi.gpio package, you won't be able to get it with apt-get, since the crossover cable does not allow you to share an internet connection with the Raspberry Pi. (Unless you want to make things really complicated.)

There are instructions on installing the library manually over at Raspberry Pi Spy http://www.raspberrypi-spy.co.uk/2012/05/install-rpi-gpio-python-library/

Basically, you download the package on your laptop and copy it over to the Pi:

Then you install it manually on the Pi:

Now we're ready for our Python code. This one sets up the GPIO input/output to control a pin, then sends out "SOS" in morse code by setting the high and low voltage on one of the pins:

We'll be turning pin 15, labeled "P22", on and off with the Python script, so that's where we'll start our circuit.

We run a wire from P22 into a resistor, to step down the voltage. We then run that into an LED, and finally, we connect the circuit to ground. 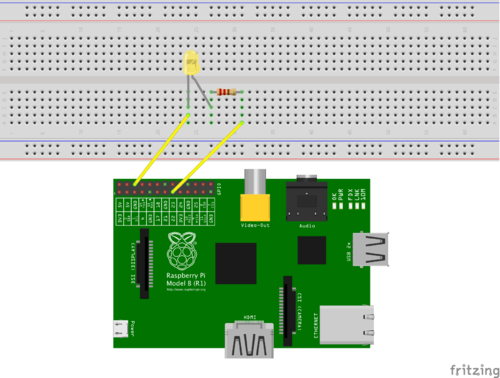 and the assembled circuit:

Once you've done this, you've got all the pieces you need to run your Hello World script.

1. SSH to the Raspberry Pi from your computer

2. Run the GPIO script as root

3. Sit back and enjoy the show

This project was very caveman in nature.

The next step was using a better morse code library. See the RaspberryPi/Morse_Code page. Morse code was used for hardware control via software onboard the Pi.