Nominally, stunnel provides SSL encryption and decryption, which provides services not capable of SSL to communicate securely using SSL. (Example: if a mail server listens for unencrypted mail traffic on port 25, and clients send encrypted mail traffic on port 465, stunnel listens on port 465, passes traffic through stunnel to decrypt it, and then passes it to local port 25.

But this can also be used to wrap arbitrary traffic in SSL. In the case of reverse SSH, this provides a way to "wrap" SSH connections in an SSL layer, to make it through the firewall and past intrusion detection systems.

Our stunnel setup will be as follows

The stunnel client will be our Raspberry Pi.

The stunnel server will be our command and control server.

Now you need to generate private keys, so that stunnel has private keys to use when encrypting using SSL.

First, go to the directory where stunnel keeps all of its files:

Use the openssl library to generate a 2048-bit private RSA key:

To do SSL, an stunnel server must have an SSL certificate, which requires a private key and a signature. We already generated a private key, so now we generate a certificate, and use our own key to sign it. Do this by running the following:

Now you have your private key in key.pem and your server's certificate in cert.pem.

put those both into the certificate file that we will point to in our stunnel configuration file (next section):

Now edit the stunnel configuration file on the command and control server, which is located in /etc/stunnel/stunnel.conf:

Open Your Firewall to SSL

Assuming SSH over SSL connections will be coming in through port 443, we should open this on our firewall on our command and control server. This is my open_firewall.sh script:

Start by installing stunnel on the Pi:

One option, if you want to hack it (this is an insecure option), is to copy the private key from your command and control server to your Raspberry Pi.

A better way to do it would be to generate private keys on both the server and client, and use a level 3 verification in stunnel, whereby both client and server check each others identities. But we're just testing this out.

From the Raspberry Pi, we copy the stunnel private key and certificate from the command and control server at 10.0.0.19:

Now edit your stunnel configuration file to resemble the following:

Let's break down what that means:

stunnel accepts SSH traffic on port 443. (That means, we have to run the ssh command like ssh -p 443)

It reroutes that SSH traffic through stunnel to wrap it in a layer of SSL encryption. (This is the key to getting past the firewall and IDS).

That encrypted SSL traffic is then sent out to the remote command-and-control server, via port 443. And now there's essentially no difference between how your connection looks and how a standard HTTPS browser session looks. And because it is wrapped in SSL, the firewall/IDS says its ok.

Open Your Firewall to SSL

The last step is to open your client firewall to outgoing SSL connections, using the same firewall.sh script as before:

Okay, now give it a shot!

From your client (the Raspberry Pi), run the following command:

Here's a photo. The Raspberry Pi client is "kali-pi" and the command and control server is "kronos": 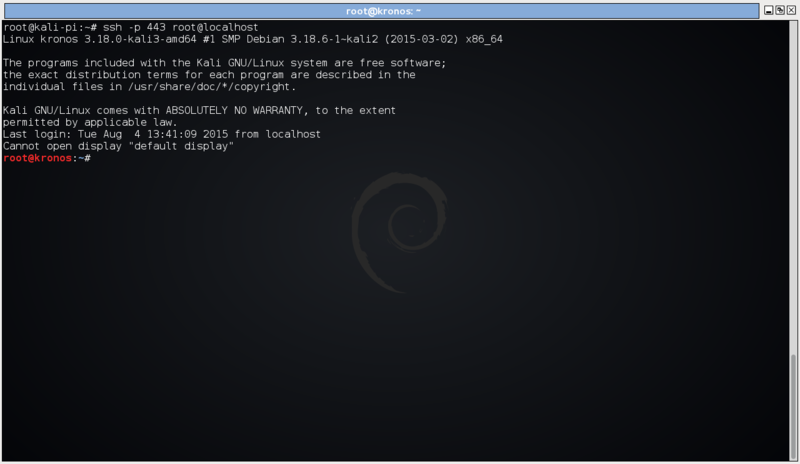 That SSH traffic is routed to port 443, where stunnel is listening. Stunnel wraps the SSH traffic going through port 443 in an SSL layer, than sends that SSL traffic out and over port 443 to our remote command and control server. The remote command and control server, which also has stunnel running, listens on port 443, and when it finds traffic, decrypts it and reroutes it to local host port 22, where it looks like regular SSH traffic.

Part 2 of this trick will show you how to set up a reverse SSH connection, so that when the Pi connects to the command-and-control server, it sets up a tunnel that reverse connections can then use. See the RaspberryPi/Reverse SSH Stunnel article.