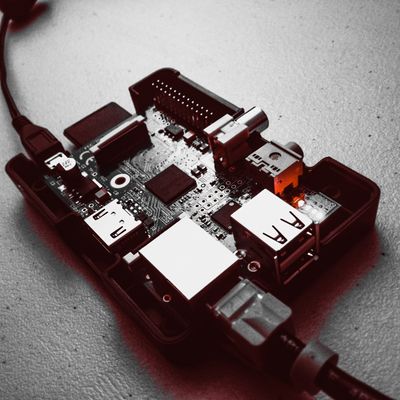 This is a guide to connecting to a headless installation of Kali Linux on a Raspberry Pi. General info about running Kali on the Pi here: Kali Raspberry Pi

A Note on Headless

Why did I write this article? Two reasons:

I simply didn't have the luxury (or the hardware and adapters) to get this thing working. I had to get this headless Kali Linux Raspberry Pi working, without a screen, without a keyboard: literally, a black box.

Once you've got Kali on the Raspberry Pi, now what? Well, it's pretty easy: once you boot up the Raspberry Pi, it will have a static IP address. The one we picked will let us SSH into the Pi if we have a network cable plugged into our laptop.

That's right: one end of the network cable into the laptop, the other end into the Pi:

Check to make sure your Kali Pi image matches your Raspberry Pi version. Version B+ has two USB ports, and Version 2 has four USB ports. You can download your Raspberry Pi Kali image from the Offensive Security webpage: https://www.offensive-security.com/kali-linux-arm-images/

You can use the resulting image file to flash the SD card that your Raspberry Pi will use.

You'll want to set a static IP address for the Raspbery Pi before you boot. Assuming we're connecting the Pi directly to the laptop with a crossover cable, we'll use an IP address in the range 169.254.X.Y. The IP prefix 169.254, like the IP prefixes 192.168 or 10.X, is a special IP address for special networks. In this case, 169.254 is the "link-local address" - an IP address range for devices connected directly to the computer with a crossover cable. (Original source of this IP address was here, but a search for 169.254 will point you toward the "link-local address" Wikipedia page here).

For more details on this procedure, see RaspberryPi/Headless

I detailed a problem connecting to the Pi via SSH, which took me a long time to resolve. The issue was that I was powering the Pi through a mini USB hooked up to a computer, which was not providing the Pi with enough power to run the ethernet port 100% of the time (or most of the time). Plugging it into the wall socket resolved the issue with SSH connectivity.

In the process, I discovered a few things.

Part of my struggles in debugging the issue above led me to the rc.d and init.d on the SD card, and modifying the services that start on boot on the headless Raspberry Pi.

Here's how to add and modify startup services and configurations on the Pi:

First load up the SD card and mount it (as described at Kali_Raspberry_Pi/Installing#How_the_Kali_Linux_Startup_SD_Card_Works).

Now you can modify files in the Linux partition, to change what starts up at different runtime levels. Debian Raspberry Pis start in runtime level 2, so anything you want to start up should go in etc/rc2.d.

Actually, what you should do is, put a service script in etc/init.d/myservice, make it executable, then create a symbolic link in etc/rc2.d.

By The Way: Modifying Configuration Files on the Raspberry Pi

Note that the above handy trick, editing the Linux partition on the SD card, can also be used to modify configuration files for programs. Want SSH to listen on port 8080? You can edit the etc/ssh/ssh_config file to change the SSH configuration. Want to edit the crontab file? Go for it.

I had to waste a lot of time and bang my head in figuring out this SSH problem. But in the process I discovered that (duh!) the headless Raspberry Pi logs everything that's happening. You can modify the startup services or configuration files of the Raspberry Pi, set various logging levels for various programs, boot the headless Raspberry Pi, try and do whatever you're trying to do, and if it doesn't work, you can mount the SD card on your laptop and inspect the log files.

NOTE: This requires you to be able to mount the Raspberry Pi's ext4 filesystem in Mac.

With these and the many other hints, tricks, and tips available online, I'm sure you'll be able to find your way $HOME on the headless Kali Linux Raspberry Pi.