Timelapse number 3: accomplish a few improvements in the timelapse process.

What to do differently for this timelapse:

Weatherproof Pelican case is on order, but it's going to take two more days. In the meantime, we need to make some progress on this camera stuff. Move on with it.

Putting off the weatherproof case for Timelapse number 4 or number 5.

My goal was to house the camera and get better stability/control than the terrible botched christmas-present wrapping of scotch tape that I did last time in RaspberryPi/Timelapse2. Shouldn't be too hard.

The big improvement will come when the weatherproof Pelican case arrives, and I'll attach a weatherproof port for the camera on the outer housing of the Pelican. But in the meantime, here are some short-term improvements.

I went to the craft store to get a a big stick, and I laid everything out in a natural way and taped it all into place. One of the big mistakes I made last time was trying to bend the ribbon cable attaching the camera to the RPi out of a natural position, which led to it popping loose inside of the camera housing. With this configuration, things have the space they need.

It is nowhere near weatherproof... but the weather has been nice lately. 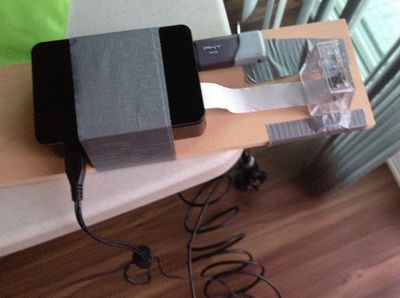 Outfitting for a Tripod

I was able to drill a hole in the center of the wood to create a hole that could be attached to a tripod-mountable screw I had. This enabled me to attach the camera to a tripod, and adjust the angle of the camera. I even tied a piece of cord around a hole at the end of the plank to tie to the balcony, in case of massive failure of the tripod. 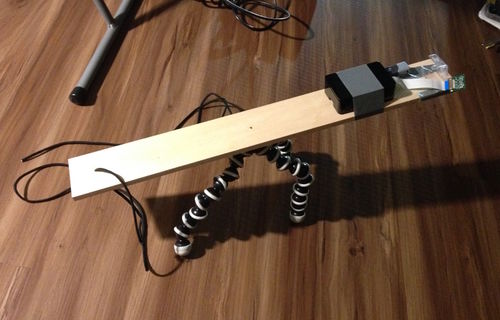 So much for being a hardware hacker.

I tried unsuccessfully to set the camera LED state from Python script:

According to the help page for the camera object, help(camera), this attribute is supposed to control the camera. I also read you had to be root, so I also tried doing this as root by running Python via sudo:

No success there. The LED light would come on once I had created the camera object, and would not turn off by setting the led attribute to False.

Reboot will be necessary, but once you do that, there will no longer be an annoying glaring red LED every time the camera is on and talking to the computer!

To mount and make readable/writable by default Pi user, start without the jump drive plugged in. Run this command to monitor hardware that is plugged in:

Plug in your USB drive. It should probably be called /dev/sda1. Once you know the name of the device, you can mount it to a folder (which must exist ahead of time):

Test that you can indeed make stuff in the new jumpdrive:

Hooray! Now move all the scripts there:

To serve up the photos, SSH into the Pi, and cd to the directory where the photos are located. Start a screen session by running the screen command. Now run a Python simple HTTP server by running the command:

Now the directory of photos from the Pi camera should be accessible at the Pi's IP address, port 8080. For example, if the Pi is at the IP 192.168.0.111, then the photos can be viewed by pointing a browser (also on the local network, of course, along with the Pi) to the address:

This is typed into the browser, and the files in the directory are served up by the Python simple HTTP server.